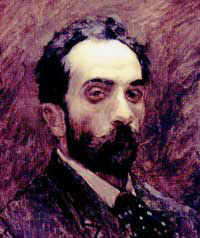 Isaac Levitan was born on 18(30) August, 1860 in an intelligent Jewish family living in the Western skirts of Russia in the place near of the Kibartai railway station (nowadays Kibartai is a city of Lithuania). The artist’s father wearied for making provision for his family like anything, but taught children himself. (Isaac received elementary education at home). At the end of 1860s his father carried his family over Moscow to give his children an opportunity to become literate.

In 1873 Isaac Levitan entered the Moscow School of Painting Sculpture and Architecture. Isaac was talented and because of that he began to take rewards for "his first performances during art classes". Levitan was taught by such Russian famed artists, as Perov, Savrasov, Polenov.

After his parents death the young student stayed alone on the pavement as a beggar. That time he was 17 years old. Levitan was wandering very long, he was let down. Isaac Levitan was perpetually in want...

When Isaac Levitan had become seventeen years old he was an exponent for the first time. Two pictures of the artist, "Autumn" and " a Verdurous Yard" came to stay both the audience and artists. For the second time Levitan exhibited the picture "An Autumn Day. Sokolniki", which was bought by P.M. Tretyakov during this disciple exhibition.

The scenery creation to operas " Ivan Susanin", "A Frosty Girl" and "A Water-nymph" gave Levitan the opportunity to make a trip to Crimea, where he limned the etudes. With help of them he earned fame.

Having made a trip to the Volga in 1887, the picture “An Evening on the Volga” and some more Levitan's pictures were bought by Pavel Tretyakov.

When the exhibition had been moved to Moscow, people began talking differently about Levitan's pictures. They got over the footlights among both the artists and audience. "Levitan came to stay and became the first Russian landscape-painter".

One of the best Levitan's pictures" is "A Quiet Tenement". During the nineteenth mobile exhibition, it was the craze. The contemporaries professed that it was Levitan who depicted the native nature as "something new and at the same time very agnate, valuable, home..."

Everywhere in each mobile exhibition or in Moscow Amateurs of Applied Arts Association terminal exhibitions or the International exhibition in Munich there were Levitan's pieces of work.

The Perfect School became the heart of Moscow art life. Since 1898 Isaac Ilyach taught the Art in the Moscow School of Painting Sculpture and Architecture, approving as a remarkable teacher.

Very close to Levitan among his contemporaries was Anton Chekhov. Between them there were as well business relations as dealings. They met each other at the end of 1870s, when both of them were the poor students. Their mutual relation differed by rare affinity not only in the perception of a nature, but also in the deep world outlook cores.

Having recovered from typhus for the second time in 1896, the diagnostics of the heart disease letting hear early grew in momentum.

The Isaac Levitan early dead on the boundary of 19th and 20th centuries. Thus, he summed up by his work the many Russian art best features of the last century.

Levitan limned about thousand pictures, etudes, drawings, sketches less than for a quarter of century.

The artist happiness having sung his song and having been able to talk with a landscape face to face left with him and was passed over people.