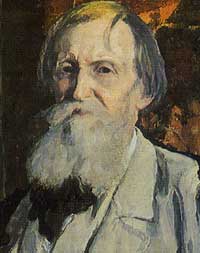 Victor Vasnetsov is one of the most famous Russian artists of the 19th century. He was called "a perfect Bogatyr of Russian painting". Vasnetsov has settled the new important points. The main one of them was creation of the common style covering different kinds of art and also to be based on national traditions. Because of that fact the artist in his work appealed to the basic expressive means of Russian folklore or Russian ancient art and architecture. First of all he appealed to the system of Russian art in general, and then to its stylistics.

Victor Vasnetsov was born on May 15, 1848 in Vyatka region. His father Mikhail Vasilevich Vasnetsov was the rural priest. His mother’s name was Apolinariya Ivanovna. In his family there were six children. Victor was the second one. The parents tried to bring up their children as all-around persons. They wanted to make them curious and observant. Because of that all members of the family read scientific magazines, drew, and paint by a watercolour.

The drawing filled him more and more. On Sundays he visited the market (the central part of the city to draw "characters" (people who are very individual). In his seminary note-books there were a lot of sketches making without book. Some years later he succeeded in drawing and painting, and because of that he was invited as the assistant for decorating The Vyatka Сathedral. In the first pictures, which are known for us, "Molochnitsa" and "Gnitsa" we can see the penmanship of the future creator of the ideal female Russian beauty. These pictures were sold during the auction, which was organized by the young artist friends and fans.

In August, 1867 Victor Vasnetsov left the seminary. His father didn't oppose it. Vasnetsov should study 1,5 years more but he didn't want. He won money with the help of a lottery and went to St. Petersburg to enter the Academy of Applied Arts.

After year of study in Academy of Applied Arts, where he arrived in 1867, Vasnetsov received two small silver medals for the nature drawing and the nature etude. And two years later he received the large silver medal for drawing "The Master and Pilat before the People ".

In 1874 for the drawings "Book Shopkeeper" and "The Boy with the Bottle of Wine" Vasnetsov received a bronze medal at the World exhibition in London.

In the spring 1876 Vasnetsov went to Paris on a year, where I.E. Repin and V.D. Polenov had already been working. He drew the French characters with the same pleasure as the Russian ones. He found similar features in them. And at the same time his pictures "Te a party in the Pub" and "Acrobats", in which Vasnetsov depicted a countryside view were exhibited.

Vasnetsov returned home as a mature painter. His outlook was wider, he reached his technique, and what is the most important, he roundly realized his way.

In 1880 Victor Michailovich enthusiastically impersonated the perfect national dream of free flight in the picture "Carpet - Plane". We see the time when Vasnetsov was a child. It was the great time for him. Years later he depicted a carpet, flying as a bird (glide, freely). And on it we can see the fantastic hero - winner. We can see the one of the characters, the third young princess, which primarily we saw in the picture "Three Princesses of the Subterranean Kingdom" in the pictures, which the artist would create later.

"Alyonushka" is the picture, in which Vasnetsov impersonated lyrical poetry of the native people the most fully and pathetically. At first we see the figure of Alyonushka, thinking about her bitter destiny, and then pale grey sky, and pool surface, frightening with the darkness, with calm yellow leaves on it, and soft grey colors of the drooped asps foliage, and deep dark greens of the fir-trees.

In the beginning of 1885 Victor Mihailovich Vasnetsov was invited to take part in the painting of the Vladimir Cathedral in Kiev. More than ten years Vasnetsov spent to paint the Cathedral. The fact itself of so great work (about 400 sketches, shorthand itself more than 2000 sq. м made with participation of the assistants), there was not in Russian art of all 19th century yet. He could newly make the Goodness image. He could make it without repeating anyone (with heat, sincerity and courage). He managed to show a woman beauty, greatness of mother feeling and heartfelt spirituality in the Goodness image. The Success of Vasnetsov paintings were great. In them people saw the beginning of the revival of Russian religious art, and in Vasnetsov himself they saw an ingenious creator of a new trend in the religious painting ".

So at least there were three decades between the first sketch (1871), more than two decades between the Parisian sketch and the canvas "Bogatyrs" (1898), making the great period of the artist working. Later he recalled: "Maybe I created The Bogatyrs without proper intensity, but they always existed near me, they always attracted my heart and my hand always reached after them. They were my creative duty, obligation to the native people...".

The characters, as it was accepted in realistic painting and according to a Vasnetsov creative rule, are concrete; the costumes, arms, chain amours, stirrups are historically exact. The Bogatyrs were endued with remembered appearance, bright character traits. Only these characters were not genre, but heroic.

The Vasnetsov painting itself in "Bogatyrs", its great forms, the noble scenic qualities lead us to other, finding of advantages in art than before, to nativity of new gains its "revelations and privacies". It is possible to tell, that Russian painting of the twentieth century issued from the Vasnetsov "Bogatyrs".

The picture "Bogatyrs" became one of the last Pavel Mihailovich purchase.

Makovskyi S. The Silhouettes of the Russian Artists. M.: Republic, 1999