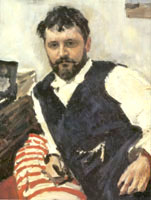 The Konstantin Korovin's work is a part of the Russian art high-water marks. Konstantin Korovin was a gifted man and an artist, a friend of Valentine Serov and Fodor Shalyapin. He imprinted in all kinds of art, which he was engaged in. He limned pictures, designed and decorated exhibition halls, worked in sculpture painting, participated in the Russian theatre reformation. Simultaneously the craftsman was teaching about two decades, having brought up some generations of Russian painters.

Constantine Korovin was born on December 5, 1861 in Moscow, on Rogozhskaya Street in family of the merchants-dissenters. Here, in the house of his grandfather, where he lived with his parents and his brother Sergey, there was his childhood.

The head of the family, Michael Korovin, became an owner of a cab, maintaining a post line from Moscow to Novgorod and blossomed out. But the sledding in commerce did not hedge Michael Korovin to love art. The artist's father Alexey Korovin graduated at the University. The mother, Apolynariya Korovina, played a harp very well. Both parents drew very well. The friends of their house were famous painters.

When Konstantin Korovin was thirteen years old he entered the Moscow School of Painting, Sculpture and Architecture, where in 1870s Vasily Perov and Alexey Savrasov were teaching. His schoolmates were Isaac Levitan, Michael Nesterov.

Since 1878 in the School he was constantly awarded by the premiums and gratefulness for his life etudes. In October, 1884 Korovin and Levitan were mentioned for the first time in Polenov's list as the most gifted students of the School of Painting, Sculptured and Architecture. It was Polenov who made too much for making of the future artist. The teacher had estimated and then developed the feeling of colors inherent only Korovin. By that time Constantine became an orphan. The famous Russian artist Polenov’s family supplied the place of his relatives.

Having decorated more than ten performances at the end of 1880s Constantine Korovin together with Polenov became the key decorators of Russian private opera of S.I. Mamontov in Moscow. By the summer of 1888 he created light and joyful early Impressionism canvasses such as "Near a Balcony. Spaniards", "At a Tea-Table" (1888), "In a Boat" (1888), "a Street in Florence" and others. Beside a plot the transmission of air and light, polychrome of the world, the revealing in a nature of conditions closed to people feelings found the greater importance in them.

After prosperous participation in the Nizhnegorodskaya exhibition, Konstantin Korovin was nominated by the artist - adviser of the Russian component at the World exhibition in Paris in 1900. With the help of it he also earned European fame, two gold medals, two silver ones and the officer cross of the Legion Honour. Thank to Korovin "a Russian Village" got over the footlights.

The artist met the 20-century as a craftsman passing through the time of creative maturity. His talent and his merits were accorded recognition. In 1900 The Tretyakov Gallery got a landscape "Winter". The government put the Parisian panels in The Russian Museum of The Emperor Alexander III in St. Petersburg. The name Korovin found a deserving place in the book of Alexander Benois published in 1902 "a History of Russian Painting of the 19th century".

In 1899 Korovin was teaching at E.N. Zvantseva's School, and since 1901 he together with Serov were holding the portrait genre classes in the Moscow School of Painting, Sculpture and Architecture, which he had previously graduated at. Constantine Alexeevich was a teacher while the Soviet authority won office. After that Korovin became the academician (1905). Since 1910 Korovin became a decorator and an artist-adviser of Moscow Imperial Theatres.

At the end of 1900s that big and free outline drawing manner inherent only to Korovin was formed in the artist work. It would be forever connected with the name Korovin. Decorativeness, common mood without psychology are appropriate to the majority of Korovin portraits. But there are some works stood out this list very much. They can be included in number of the best products of Russian portrait painting. It is the Italian singer Andzhelo Mazini’s portrait (the beginning of 1890s), the portrait of Nicholas Dmitrievich Chichagov (1902) and the portrait of Fodor Ivanovich Shalyapin (1911).

The events of 1917 connected with the February Bourgeois Revolution, and then with the Great October Socialist Revolution involved him in their circulation. In 1921 and 1922 in Moscow there were the first personal Korovin's exhibitions. In the conditions of the trends fighting having become severe the disputes on new Soviet art failed.

Last sixteen years of the artist life were connected with France. He got it through Riga and Berlin at the end of 1922 because of his son treatment and making an exhibition.

Korovin continued to limn pictures, filling the separate orders for theatres of Europe and America. In Berlin (1923) and later in Paris he arranged some personal expositions; he participated in-group exhibitions of the Russian artists.

Korovin couldn't become a part of French life. He loved Paris only as a visitor and pined for his home very much.

The Artist died on September 11, 1939 in Paris and was buried on the Biyankurskoe Cemetery. On March, 1950 using resources gathered by Russian people living in Paris Korovin's bones and his wife ones were transferred to an orthodox cemetery in Sen-Gene-Vive-De-Boa.

On the day of his fiftieth anniversary Konstantin Alexeevich accordingly determined the quality of his work "My main exclusive ambition in art painting which I followed up was beauty, aesthetic influence on the audience, charming of paints and forms. There is never any homily to anybody, any tendency ".