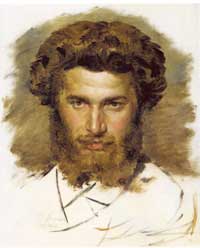 He was originally a Greek. His father was a poor shoemaker. Arkhip Kuinji early became an orphan. Kuinji wandered, he had to earn money. Then he got to St. Petersburg. Twice he tried to enter the Academy of Applied Arts, but he didn't become a student because of his unprepared ness. So he had to work himself, he amazed everybody by his persistence and efficiency. He had made the running, and in 1868 he was allowed to visit an Academic Exhibition and became a free-listener of the Academy of Applied Arts. His pieces of work succeeded at the exhibitions.

Kuinji went to Western Europe and learnt the latest feats in painting (Impressionists pieces of work).

When he had come back there was a sudden turning point in his work. He began to limn generalizing colors and enriching a form with the daring not seeing that day yet.
Experimenting with colors, he fetched up a tremendous effect. It seems for the audience that the canvases gleam. The lunar disk seems really shining as it happens in a lunar night (Kuinji often limned night landscapes).Kuinji transmitted unusual mysterious great moments of the nature life; diversiform of air, its volume and density, with all greatness. However, most of all in his pictures amazes us the artist delight before the Space bottomless ness and greatness.

“A Birch grove” includes the joyful, solar motive, which the artist obviously liked most of all, because of that twice he recurred to it later, but he changed a design and light a little. The feeling of a summer beginning, first hot days with bright and pure foliage and a juicy - green carpet of a dewy grass were transmitted with huge verve. The sun-sports, which are pinkish on fresh birches bark and bright and soft yellow and green in the grass; the relief of “absolutely round” trunks; a damp brume, due to which the grounds are so appreciated, all these things ecstasies the audience. And according to the critics people killed time near this picture.

In 1881 Kuinji exhibited he second version of this picture at an exhibition where there was only one picture. After that there was the same exhibition where the picture “Lunar night near the Dnieper” was exhibited. It was a very courageous step. You know during that time even the personal exhibitions have still seemed as a gimmick, don’t you. But success of these exhibitions, gathering a crowd, licked all creation.

Lo and behold, in the heyday of his glory, Kuinji made a new unexpected step. He stopped to exhibit his pictures at all. He went on to work very much experimenting to the top of his bent. He transmitted his feelings to the nature with portentous briefness. But all he had made Kuinji showed only to the relatives now.

Some years he taught in the Academy of Applied Arts. He was also swept off his feet educating the perfect craftsmen. He used the own well thought-out method. It was he who educated such perfect craftsmen as Nikolai Roerich, who remembered him all his life with violent delight and love calling him as the teacher of life.

Kuinji became the man of means (his pictures were bought at a price). Using his own funds he carried his students in Western Europe. Before his death he established the Independent Artists Association (the Association by the name of Kuinji) to which then he left all he had, all his money and pictures.

Kuinji also demanded of sacrificial love to the art from his students. The perfect artist for him was firstly that man who loved the art very much.

Arkhip Kuinji did not hold to any dogmatically strict tutorial system. It was not casually that his each student differed by the strongly marked verve. He demanded of their own ideas, which would suggest the individual handling concerning their pieces of work from his students. Kuinji's figure itself attracted the youth and he was a shining fugleman of an impersonal service to the art. Having come to stay, he avoided the glory. The popularity gave him fleshpots of Egypt, but he didn't stop living in a small way. Arkhip Kuinji always willingly supported poor students, he gave mint of money for needs of art and for the same reason he left all his substance.
In his own workshop he himself constantly experimented with colors. He worked hard and for hours and hours, it helped him create bewitching canvases.

The colors found by Kuinji also captivated his students (K. Bogayevsky, A. Borisov, A. Rylov, V. Purvit, K. Vroblevsky, N. Roerich). However, they did not sit at his feet. Later each of them became the separate perfect artist.