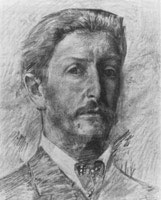 Mikhail Alexandrovich Vrubel was born on March 5 in Omsk. Vrubel father, Alexander, is a Pole officer, served in an Omsk fortress from 1853 to 1856. His mother, Anna, nee Basargina, (She was the relative of the dekabrist N.V. Basargin.), died when the boy became 3 years old. Vrubel’s childhood and youth passed in St. Petersburg (here he attended a Drawing School of the Encouragement Applied Arts Association), in Saratov, Odessa. In 1874 he had graduated at the Odessa Classical Grammar School and entered the St. Petersburg University (a Law School). Having graduated at the University and having beard arms, he worked as a lawyer in the Senior Naval Headquarters.

In autumn, 1880 Vrubel began to attend an evening class in the Academy of Applied Arts. Chistykov and Serov taught him. And Ilya Repin taught him drawing with the help of watercolours. He learnt a lot of things attending the Chistykov classes. (Firstly it was his analytical approach to the making of the forms.). In 1884 he was invited by the professor A. Prahov to participate in restoration of the paintings and the frescos of the Kirilovskaya Church in Kiev. He created a line of designs on its walls. The most difficult in making were "The Descending of a Sacred Spirit" and "Gravestone cry".

In 1885 the artist started out for Venice with an eye to explore the ancient Byzantian mosaics standing there. He explored the well-known mosaics of the San-Marko Cathedral and the famed Revival Venetian artists canvases. The artists closely related with the dark ages (Karpacho, Chima Da Konelyano, Johvani Belini) chiefly attracted Vrubel's attention.

Having come back in Kiev he created "the Girl against the Background of the Persian Carpet" and the watercolors canvas "East Fairy Tale", which was wonderful as the Aladdin treasures cave.

In 1889 Vrubel had left for Moscow, where he met Sava Mamontov and his coterie's members. Mamontov's coterie consisted of the well-known artists such as Valentine Serov, Isaac Levitan, Victor Vasnetsov. In this period he created the great number of pictures, he painted the illustrations to Mikhail Lermontov pieces of work. He created 13 drawings, the best part of them concerning to the mystic subject (the picture "Demon"). This subject touched upon all Vrubel works. Vrubel’s talent itself made him ready for creation of this image. It was this piece of work where the potent color contrasts and figurative intensity of the forms culminated and impersonated not the bearer of evil and cunning, but timeless fighting of a rebel human spirit looking for reunion of its seized desires. According to the artist the spirit wanted to explore life but did not find an answer to its questions neither on ground, nor in the sky. On the picture "Demon", 1890 (The Tretyakov Gallery) the tempered-perfect hero is represented in hipped stupor among the semi-precious glimmer rocks. The artist desire of creating an idealized image, called to awake the audience soul by greatness of that, what had been done, was completely succeed. The background of the picture is the question "Where do you go?", which can’t hide impotence, melancholy, bitterness of a young demon. Experiences in everything, impotence and infernal trial, these things became a favorite melody of Vrubel cither.

In 1891 he became the head of the art ceramic workshop in S.I. Mamontov’s estate in the village Abramtsevo. Here the artist limned his best pictures; he was also engaged in majolica. (creating the sculptures "Egyptian", "Kupava", "Mizgir", "Volkhova"). And in the period from 1899 to 1900 he was engaged in decorative design.

The great force was also incorporated the picture "Swan-princess". There is charm of a native nature, proud and gentle soul of a fantastic girl – bird, dark witchery reduced nevertheless malicious bewitchment, a fidelity and hardness of true love, power and eternal force of goods. The widely opened bewitching princess eyes look into the deep in your mind. She is like a person who sees everything. In a picture there is no action, movement. There is quietness.

Everything is like bewitched. The artist makes us forget about skepticisms, which is peculiar for our attitude due to miracles, and exasperates in our hearts belief in kindness, perfect.

In difficult polyhedral Vrubel destiny was not placid well-being since the year of his birth. He early lost his mother. After that he wandered for ages. Then there was non-recognition lasting very long, the heavy illness; and at last after he became fifty years old there was a turning point. In 1896 he fell in love with the well-known singer, Nadezhda Ivanovna Zabela, who brought to the Vrubel inner side charm of female beauty and ease of mind.

The artist created the suite of his wife, N.I. Zabely-Vrubel, portraits. Her image lives in some fantastic and mythological female characters of his pictures; there we can see familiar features of his wife, or favorite musical kind of the color scale. In those years he limned a number of magnificent portraits, S.I Mamontova, Artsybushevyh, V.J. Brusova.

Vrubel died on April 1, 1910 in St. Petersburg. He was solemnly buried by the Academy of Applied Arts; the speech above a tomb was made by the poet Alexander Block "... Vrubel is as well individual as all other geniuses. They are not only artists, but prophets as well". By these fateful words Russia people parted with Vrubel.

Vrubel left more than 200 pieces of work. Among them there were portraits, pictures, scenic panels, illustrations; theatre curtains sketches, sculptural products, buildings projects amazing on scope and amplitude of a creative range. Nowadays his art continues "awaking soul from the little nothings of every day life by great images".